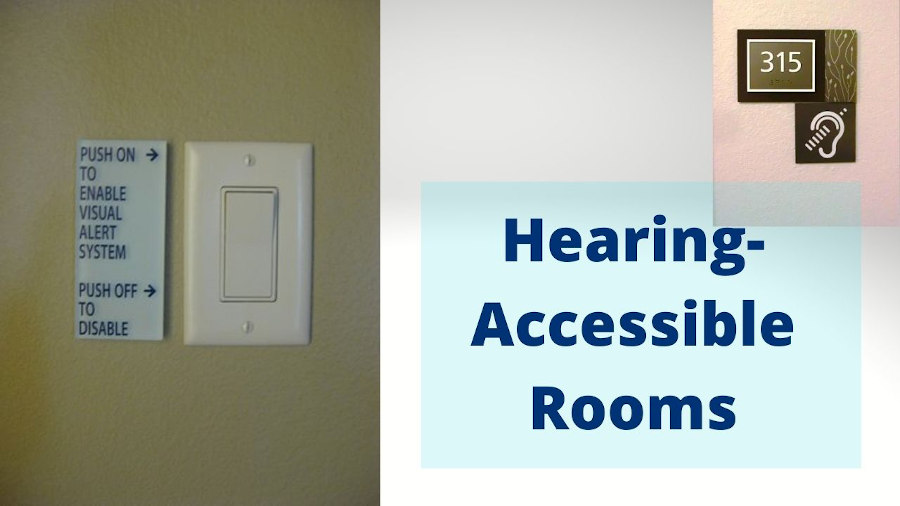 16% of American adults report at least some hearing trouble, with 11% of Americans reporting tinnitus, and 1 in 5 British adults have hearing loss greater than 25 dBHL.

With hearing problems so common, hotels are required to offer hearing accessible rooms for those who won’t otherwise be notified by the ring of the doorbell, potentially leading them to be surprised by a cleaner or other staff member who assumes they’re not in.

What is a hearing accessible room?

A hearing accessible room means that instead of using sounds to notify the occupants, lights and vibrations are instead used – as a person with severe hearing loss may not hear the sound.

For example, rather than a ringing doorbell, the room’s light may flash with a strobe light effect instead, and clocks and alarms may vibrate instead.

Other features of hearing accessible hotel rooms include:

As people with hearing impairments can also have other disabilities, do not hesitate to ask hotel staff about any other requirements, such as an accessible bathroom with roll-in shower, shorter accessible bed, wheelchair access, or a room that is suitable for a service animal.

How many hearing impaired rooms are required in a hotel?

Based on the 1990 Americans with Disabilities Act, hotels must have:

The ADA law prevents hotels from charging a surcharge of any kind in relation to these extras.

Can anyone book a hearing accessible hotel room?

Yes, there are no laws or rules preventing normally abled people from booking hearing accessible rooms. You do not need to provide any proof of disability when you book or check-in.

By law, handicapped rooms are to be the last rooms to be booked in a hotel, so that people requiring extra accessibility can access these rooms.

Can regular hotel rooms be converted into a hearing accessible room?

Yes, the original hotel rooms are built the same, with alterations being made after construction. Therefore, non-hearing accessible hotel rooms can be converted into hearing rooms by fitting them with the necessary TV, alarm, and flashing doorbell features.

What does hearing accessible mean?

Hearing accessible means that the room you are staying in has been fitted with equipment and appliances suitable for those with severe hearing loss or other hearing impediments. These include flashing light alarm clocks, vibrating alarms, captioned TVs, and telephones that can be typed into to communicate with people, among other features.

Are other accommodations available in a hearing-accessible room?

It is recommended to ask the hotel staff and inform them of your requirements beforehand, so they can let you know ahead of time what their availabilities are for you. Generally, other accessibility options for hotels include an accessible bathroom, such as one with an accessible shower (such as a roll-in shower for wheelchair users), and a more accessible, shorter bed.

Generally, accessible rooms feature larger doors for easier access, lower-positioned sinks and shower handrails for those that may struggle to reach higher sinks, and a more accessible toilet. The showers are designed so that those in a wheelchair, or standing, can access the water, soap, and other care products from either a standing or seated position.

Hearingaidbuyertoday.com is a participant in the Amazon Services LLC Associates Program, an affiliate advertising program designed to provide a means for sites to earn advertising fees by advertising and linking to amazon.com